How Strength in Numbers Can Reduce Your Healthcare Costs

As the President and CEO of the North Carolina Chamber, Gary Salamido talks to member and non-member private employers in the state on a daily basis regarding the issues they are facing.

This means his finger is directly on the pulse of these organizations with respect to their challenges and frustrations. And consistently, three things rise to the top: education and talent, healthcare, and infrastructure.

“Each year we poll about 180 CEOs across the state and (number) one or two every year is healthcare. It’s the top one or the second one and there’s not much differentiation. So, healthcare has consistently emerged and now with the pandemic it’s even more acute than it was.”

North Carolina Ranks 33rd in the Country in Healthcare Value

Unfortunately, despite the prevalence of world-class health systems on our doorstep, our outcomes are not where they need to be, and our costs are much higher than they should be.

Sadly, the problem is that employers have no idea what to do to fix this problem and it comes up in nearly every conversation Salamido has with them.

Employers want to take care of their people and they are doing everything that is asked of them, yet there is still a disconnect.

Those employees are saying, “I am doing everything you have asked me to do, yet my costs and deductibles are both rising – shouldn’t my costs be going down?  I’ve done all of my screenings, received my flu shot, lost 20 lbs. and I’m healthier than I’ve ever been yet I’m still paying more…”

Employers are frustrated because what the employees are saying makes perfect sense. The value proposition should be better than it is – yet they have no idea why costs are continuing to rise. 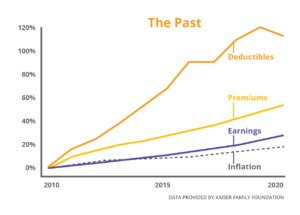 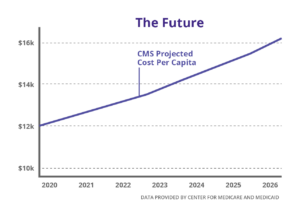 …as Salamido says and the question that needs to be asked is: “How do we align the healthcare supply chain?”

The problem is that there is no common goal that binds the various members of the supply chain – from insurers to employers to providers to vendors. In fact, incentives and motivations across the healthcare supply chain are purposefully misaligned.

The NC Chamber conducted a study recently and what they discovered was that the only way for North Carolina to become a top 10 state for healthcare value is to align the supply chain around a common goal while at the same time not placing any one member above another.

Unlike states such as Washington who has Boeing and Ohio who has GE, North Carolina has no dominant employer. So, while our greatest strength is our diversity of industries, it is also our biggest challenge. In those aforementioned states, their dominant employers can go across the supply chain and say ‘hey we have 40,000 employees, this is what WE want’ – they have all of the leverage and bargaining power.

However, in NC there is no dominant employer who has that leverage.

Employers Have Tried, But They Remain Frustrated

Healthcare is a tough and complicated industry and while employers have tried to do better, they are frustrated at not being able to make any headway.

They have no idea how to manage such a complex system and end up just baking the costs into their organization and relying on someone else to deal with it.

All of this inevitably results in consumers paying a higher cost for most products and services.

Obviously, none of this is good for the long-term viability or competition of the state if it wants to grow and retain jobs.

There is a misconception among many people that better care is equivalent to higher costs.

But that simply is not true. Actually, the opposite is often true in that better care is associated with lower and more predictable costs.

And isn’t that what employers want? Predictability? “If I do this, then this will happen.”

Of course, it is. It is much easier to plan and manage a business if you can predict what is going to happen.

So, let’s dispel that erroneous notion now in favor of the fact that better care at lower and more predictable costs is possible. Not only that, but it is also a surefire way for employers to make their state more competitive.

But There is Good News!

There is more choice out there than employers think currently exists for them to access in terms of a healthcare marketplace.

According to Salamido, “By coming together and saying the status quo is no longer acceptable we can aggregate those voices.”

One way to aggregate those voices is via Hero Health Plans where you get better outcomes at a lower and more predictable cost.

The only way to make it sustainable is strength in numbers, and that’s what Hero Health offers.

If you’re a North Carolina employer with 40 or more employees and would like better care at lower cost with more control, then call Hero Health now for a free consult. We’ve partnered with the leading employer organizations in the state, including NC Chamber, CAI and The Employers Association, as well as the leading healthcare providers to help you reduce your healthcare costs by up to 20 percent.